This week we'll be previewing the latest TLC of one of our oldest friend, here is everyone's favourite early tame, the Triceratops! 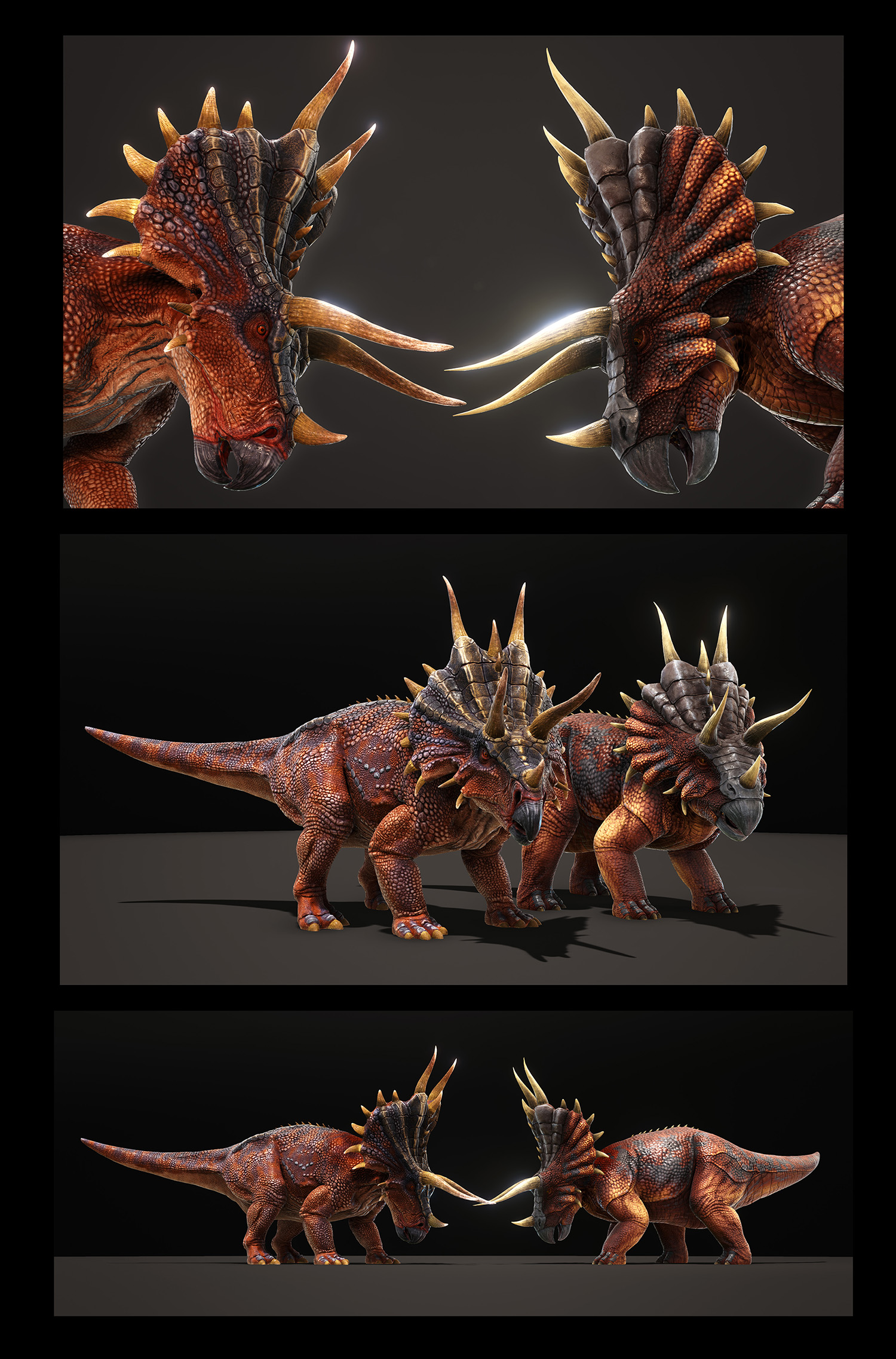 The Triceratops, one of our oldest friends and earliest creatures implemented into the game will be receiving both a gameplay update and visual update including facial changes plus a reskin. Generally, in terms of gameplay, we felt that the Trike was in a relatively good place in regards to how much benefit in provided vs how difficult it was to obtain. As an early game herbivore, we didn't want to do a complete redesign however it was clear to us that there were some very obvious changes we needed to make.

First of all, the Triceratops will receive the ability to perform a charge and ram attack! It has a short-wind up time to notify that the trike is preparing to charge, the attack will build speed and damage during the windup, which then transfers to increased damage and ends in a ram attack which will knock targets back and can leave them stunned for a short period of time.

Additionally, its herding instincts will be improved, resulting in two changes. A 'Rivalry Buff' which will be applied to all nearby ally Triceratops when in range of large therapods and carnivores that will increase their stats/dmg akin to Mate Boost. It will also increase the wild Triceratops' aggro notify range by twice so that other Trikes are more likely to come to its aid.

Introducing Zen Rowe!
Zen Rowe will be joining our Community Team as the Mod Community Manager! Here's what he had to say:

Allow me to introduce myself, My name is Josh, but some of you may know me as Zen Rowe. I have been a part of the modding community for over two years now and have been heavily involved with the discord especially. I had the pleasure of helping new people in the community learn how to use the ARK Dev Kit and watched them build out their ideas for mods, just as some did for me when I started out. For the last several months I have been sponsored for one of my projects, ArkFrame, which focused on enhancing the mods made by others and supporting interaction between mods.

Today, I am excited to become your new Mod Community Manager. My objective is to bring more consistent communication with the community and help mod authors build the quality of their projects even further. I will also be leading the sponsored modding team and be providing support for their projects.

We already have some changes planned for the mod community that will be coming soon. Every other week, as part of the community crunch, I will be doing mod spotlights and giving tips, tutorials, and best practices. We are also going to start hosting a Mod Tutorial Contest every other week. As a community, I believe we can embolden and encourage each other to make ARK even better, and I will be an active presence in the multiple areas of the modding community (UE4 forums, Discord, Steam forums). I look forward to working with you all and for our first bit of exciting news, let's begin with the Modding Tutorial Contest!

The goal of this contest is to encourage mod authors to share knowledge and increase the skill level and understanding of mod authors that are new or trying to acquire new skills.

The Great Migration #2!
This will be our final warning regarding the second deprecation of some of our legacy servers! It will take place on Friday, 9th of March. We'll be starting off by working on bringing these specific Legacy Servers offline in the early morning, and by the end of the evening, we'll have a launched a bunch of new Official Servers across all platforms. The save files for the PC servers will be made available on Friday the 9th, and we'll be working with Nitrado to get the console ones online as soon as possible! If you are a player on the Official Legacy Server Network please read the full post at the link below for more information as well as a list of which Legacy servers are being taken down permanently. 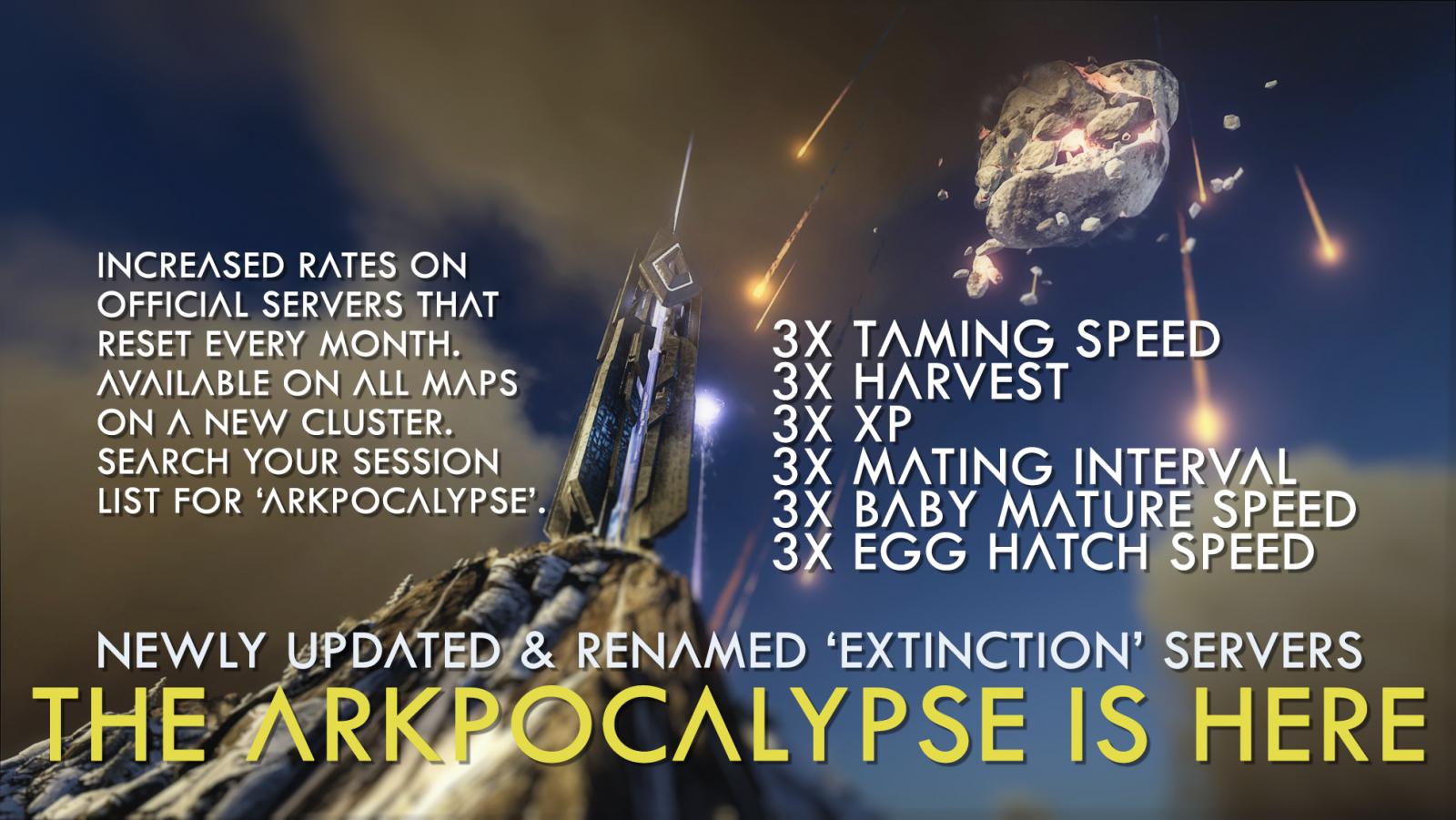 Our previously named Extinction servers have been renamed ARKPOCALYPSE servers for all platforms. They also have increased rates! Join a fast-paced server that wipes every month! The increased values are listed below as well as the key ones are listed on the image above.

Fan Building Contest!
https://www.youtube.com/watch?v=scIG_R9UOWM
Survivors Firespark81 & GGFizz are currently hosting a building contest for fellow PC Survivors. They are doing both a vanilla and modded contest.

Be sure to get in touch with them if you're interested in participating, and good luck!

To read the rest of the Community Crunch this week, check out our announcement post on survivetheark![survivetheark.com]